Huffman coding is a variable length encoding technique used for lossless data compression. It involves the creation of a binary tree data structure in an elegant way. An opinion sometimes heard on Rust discussion groups is that beginners shouldn’t attempt implementing data structures (linked list, tree etc) as entry level exercises because it is tricky; but we will see that fortunately, the Huffman tree can be created very easily and encoding/decoding based on the tree can also be written as simple functions.

Imagine that you are finding out the frequency of occurrence of each alphabet in a text document that you are planning to compress. You see that ‘z’ has a considerably lower frequency of occurrence than ‘a’. Now, it is obvious that if you assign a longer bit pattern to those alphabets which occur less frequently and a shorter bit sequence to those occurring more frequently, you should be able to conserve space.

Let’s say you assign the code ‘10’ to alphabet ‘a’, the code ‘11’ to alphabet ‘b’ and the code ‘1011’ to ‘z’. This encoding satisfies the property that the alphabets which occur more frequently have shorter representations. But, there is a problem. If you encode a ‘z’, when you try to decode it, you can decode it either as ‘z’ or as ‘ab’.

Huffman encoding provides an elegant solution to this problem. Using this technique, you can generate variable length codes with the property that that more frequently occurring alphabets are encoded into shorter bit patterns (and vice versa). Also, each bit pattern will yield a unique alphabet - no pattern will act as a prefix of any other pattern; there will be no ambiguity in the decoding process.

Let’s first write a function which will count the number of times each alphabet occurs in a string of alphabets. The basic data structure we need for writing this function is a hash table.

inserts 0 as the value for the key ‘ch’ (if the key is not present) and returns a mutable reference to the value (refer documentation for HashMap and Entry).

Here is the equivalent Python function:

The Rust code doesn’t look much more verbose or noisy compared to the Python code!

Once we get the character frequencies, we can build a Huffman tree which will help us generate optimal encodings for each character in our input text.

To make things easy, let us say the input string is “abaabcd”.

The following code fragment will generate the frequency table for this input:

Here is the output I got:

The leaves of the tree are individual alphabets. The edges of the tree are labelled “0” and “1” (left edge is “0”, right is “1”). The “code” for an alphabet is simply the labels on the edges encountered on a traversal of the tree from root node to that particular leaf node.

For example, code for “a” is “1”, you need to traverse only one right edge (labelled “1”) from the root to reach the node containing “a”.

If you encode the original message using this scheme, you will use only 13 bits. The same message stored without any encoding in a C character array will consume 56 bits.

The logic is simple:

Representing the tree node (in C)

If you are coding in C, here is how you would represent the node:

The array will be represented as an array of pointers to dynamically allocated nodes:

How do we represent a tree node in Rust?

Here is a first attempt, leaving out the two pointers:

How do we represent the two left, right pointers? Let’s first see how we can do heap allocation using a Box in Rust.

The definition of “p” in the above program is analogous to the following definition in C:

The variable “p” is laid out on the stack.

Here is another way to allocate a Point object:

You can think of this as somewhat similar to the following in C:

A Box in Rust is a pointer to heap-allocated storage.

The following figure shows the same structure allocated on the stack as well as on the heap (using a Box): 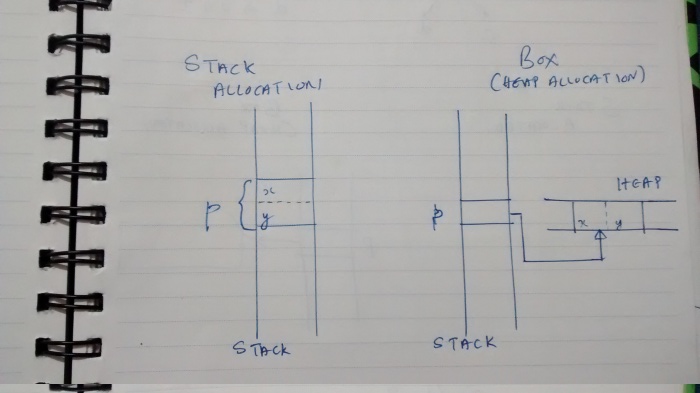 Now, coming back to the tree Node, we can easily represent the two pointers, “left” and “right” as two Boxes:

There is another problem. Rust doesn’t have null pointers, so how do you represent the fact that the left or right pointer values may not exist?

Here is the final definition of our tree node type:

Just for fun, let’s use this struct to manually build a tree with two nodes - a root node and a child on the left.

Given a HashMap which maps each alphabet in the input to its corresponding frequency, it is easy to generate a vector each element of which is a pointer to a heap allocated Node, ie, Box

You can visualize the iter method turning the hashmap into a sequence of tuples of the form (&k, &v) where each k, v is an element of the hashmap.

The map method takes each (&k, &v) pair and builds a boxed node out of it - the sequence of boxes are then collected together into a vector.

Here is the code which builds the Huffman tree:

The sort_by function sorts the vector according to a comparison function passed as a parameter.

The ideal data structure to use here is some kind of a priority queue which provides for fast identification of the max/min element without resorting to sorting. The Rust BinaryHeap is an option. I am using a vector for simplicity.

The pop method returns a Box

When the loop exits, the vector will have just one element in it, and that will be the root of our Huffman tree!

After building the tree, we can generate the code for each alphabet by passing the root node of the tree to assign_codes.

Here is the definition of assign_codes:

If the char field of a node is not None, it is a leaf node; so we add that character as the key and s as its code value to the hashmap.

Otherwise, we recursively descend to the left and/or right adding a “0” or a “1” to the current code sequence.

Given a message, encoding it is simple. Just look up the hashmap for the code corresponding to each character and concatenate all the codes.

How do we decode a string of 0’s and 1’s to get the original message? Start from the root of the tree and move left or right depending on whether you get a 0 or 1, stop when you hit a leaf node and emit the character stored in it. Now once again start from the root node and repeat the same process for the remaining part of the encoded string stopping when a leaf node is encountered … repeat till the encoded string is completely consumed.

Here is the implementation of the decoding logic:

Check out my github repo rust-for-fun for the full program.

Check out source code of a Python implementation of Huffman coding by Chris Meyers.