Elixir is an exciting new programming language built on top of the amazing Erlang virtual machine. The Erlang virtual machine is a battle-tested platform for building highly concurrent, fault-tolerant distributed system. Elixir provides us with a more modern syntax (and better productivity and extensibility through macros and protocols) to access the power of the Erlang Virtual machine.

I conducted a hands-on Elixir workshop at Govt.Engineering College, Palakkad on the 17th. I began by describing the major features of Erlang and how Elixir comes into the picture. This was followed by some hands-on experiments where students played with small programs in the Elixir REPL. I barely had time to touch upon the concurrency features of Elixir. Overall, I had the feeling that students did not have too much trouble with Elixir syntax - but the functional way of doing stuff (mainly immutability) will take some time to sink in. 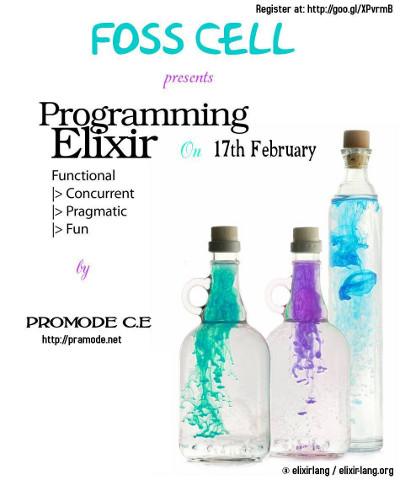