I did a demo of the Raspberry Pi at Electronics Rocks 2012, an event by the "Electronics For You" group. The demo was at the NIMHANS convention centre, Bangalore. 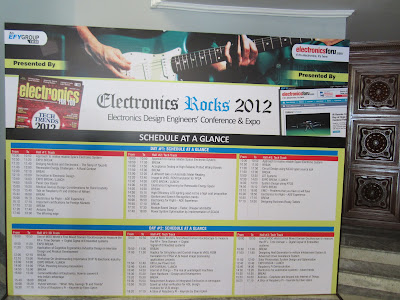 The Raspberry Pi was very well represented at the event with 3 talks, one by Eben Upton himself (G+ hangout).

Here are some points mentioned during Eben Upton's keynote and the audience interaction which followed:

Motivation behind the project: In the early 90's, most students (in the UK) who entered college for undergraduate CS education had background in stuff like assembly language; by about 2005, the students had background in HTML! This was a drastic decline in standards. There was a need to reinvigorate CS education - the raspberry pi project has this as the primary objective.

On the "secret" behind the low cost of the device: A pretty good (and low cost) SoC from Broadcom, putting only those things on the board which are absolutely essential. On making the board schematic "open source": It seems the schematic is at the moment done using some expensive proprietary package - once it is translated to something accessible to the hobbyist community, it seems they have plans to release it, which should result in more innovation by the users (Eben specifically mentioned addition of stuff like Power-over-ethernet)

On naming the board as "raspberry": Eben joked about there being lots of companies named after fruits (with an indirect reference to one particular "fruity" company which many of us in the Free Software community love to hate)

On the "roadmap" for the project: It seems there are no immediate plans to bring about modified versions of the hardware. The foundation seems to be planning to focus more on the "educational" aspects of the project.(Update: just now I saw that they are bringing out a slightly modified version of the board ...)

The "open hardware" movement was in general well represented at the event, with a talk by Anool (of the Wyolum project - I heard about Wyolum from Anool - he also showed me a cool Rpi case!) on using KiCad for designing PCB's. I also met Priya Kuber once again (after the event at CIS) - Priya was presenting a talk on the Arduino.

There were people from both Element14 and RS components at the event - had some discussions with them regarding the Rpi.